What Is The Wordle Game [Explained]

Wordle has so far been the most viral hit of 2022, so if you’re wondering, “What is the Wordle game?” Here’s what you need to know. Wordle is a word game that you may have heard of. Maybe you’ve even played the game before. The online puzzle has grown in popularity to the point where some individuals can’t imagine going a day without it. Many players use social media to share their game outcomes.

Only 90 people had ever played Wordle as of November 1. That number had risen to 300,000 in just two months. The game’s popularity was aided by social media users, particularly celebrities. 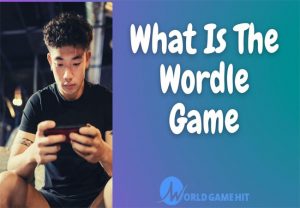 What Is The Wordle Game That Everyone Is Playing?

You may play Wordle, an online word game, every day. It’s simple to do, enjoyable to do, and you just have to do it once a day, similar to a crossword puzzle.

There’s always a brand new word of the day every 24 hours, and it’s up to you to find out what it is. The rules will be explained in greater detail in a separate post.

Wordle provides players with six chances to choose a five-letter word at random. Green will appear if you place the correct letter in the correct area. A proper letter turns yellow when it is typed wrong. A letter that has nothing to do with the term appears gray.

You can enter a total of 6 words, which implies that five burner words can teach you about the letters and their locations. You’ll only get 1 chance to use those hints. You can even go for speed by guessing the word of the day in three, two, or even one attempt.

It’s all very simple, yet it’s also quite appealing.

Josh Wardle created Wordle, a web-based word game. Players have six chances to guess a five-letter word; feedback is provided in the form of colored tiles that indicate whether letters match or are in the correct location for each guess.

The game’s mechanics are substantially identical to those of Jotto, a 1955 pen-and-paper game, and Lingo, a US television game show. With all players competing to guess the same word, Wordle has a single daily solution.

Wardle made the game for himself and his wife to play before releasing it to the public in October 2021. Wardle added the ability for players to replicate their daily results as emoji squares, which were extensively shared on Twitter, and the game gained a lot of popularity in December 2021.

There were numerous clones and modifications of the game, as well as versions in languages other than English.

Are There Any Wordle Clones?

Wordle, the browser-based word-guessing game that has surpassed Twitter in popularity, is a useful platform. It’s so good, in fact, that fans of the original have created over a half-dozen new variations (and some rip-offs).

From the aggressive Absurdle to the incredibly tough two-word Dordle, there’s something for everyone. Wordle isn’t the first word-guessing game, but it is the first to gain popularity in this fashion on the internet, so it’s no surprise that new users are experimenting with the structure.

The most basic form is Lewdle, which works in the same way as Wordle but uses a different word list. Only “lewd” terms are accepted by Lewdle, which is a word I hate (and to protect my sanity it will not appear again at any point in this article).

ProTip: Try things that start with “cks” in your first guess; you’ll eliminate a lot of probable words quickly. Lewdle is a daily game similar to Wordle in which everyone receives the same word, which distinguishes it from many of the other recently launched Wordle versions.

Did The New York Times Buy The Game Wordle?

Wordle will “initially continue free to new and existing players” when it moves to The New York Times’ site, according to Wardle, who claims he’s working with The New York Times to protect users’ existing triumphs and streak records. The decision by the New York Times, on the other hand, leaves open the possibility that the company will decide to place Wordle behind its paywall in the future.

Wardle admits in his announcement of the sale — for an “undisclosed amount in the low seven figures,” according to The New York Times — that running the hugely popular game has been “a bit overwhelming,” especially because he’s the only one in charge of it.

“We couldn’t be more happy to be the new home and proud guardians of this amazing game, and we’re thrilled to help bring Josh Wardle’s cherished creation to more solvers in the months ahead,” Jonathan Knight, general manager of The New York Times Games, said in a statement released by the Times.

Is The Wordle Game Free To Play?

Wordle is the viral game we didn’t realize we needed, so it’s reasonable that The New York Times, its new owner, is worried that it may be destroyed in some manner.

However, as technologist Aaron Rieke masterfully demonstrated in a Twitter exchange, this is improbable because Wordle is a web page, and online pages can be saved. (This page uses client-side coding, which substantially improves efficiency.)

You can get a complete copy of the game right now that includes all of the answers, cycles to a new problem every day, and still has the same “Share” button for sharing those all-important little squares with other players.